Raven Lee Toney admits there’s little that will entice him to return to his former acting career, except being offered a part in Captain America or some other superhero flick.

Until then, his passion for repurposing furniture has his complete attention.
Describing his work as ‘a bit across the board from mid-century modern to barn wood rustic”, Toney personally visits clients’ homes to create the ultimate custom pieces and also travels out-of-state to develop commercial pieces for large corporations.
For many years he was working out of his garage.  His choice to locate to his newly created 2500 square foot space in Tyler Village was based on input from Tyler tenant Dominic Fiorello (Dominic Fiorello Studios) and other furniture makers.
Check out his work and learn more about his repurposing at https://raventoney.com. 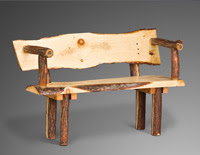